Definition: a nun who is head of a religious house or order
Source: http://www.merriam-webster.com/dictionary/prioress​
Modern Autobiography

The prioress is portrayed as a materialistic and fake nun, we chose to use Instagram for the digital commonplace book because it is a place where fake and artsy people thrive. Below are the pictures that capture the idea of the prioress the most. 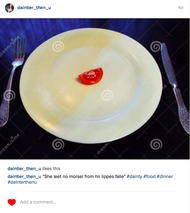